The Pine Bush is a beautiful place to walk. The soft, rolling sand dunes are a walker’s dream. You can take a bus to the Pine Bush from downtown Albany. The Pine Bush is the perfect spot for outdoor activities. Save the Pine Bush sponsors walks almost every month of the year. Join us! – Ed.

Albany’s newest bicycle path runs along the shore of Six-Mile Reservoir and is a safe and scenic shortcut between Rapp Road and Fuller Road. Ever since I discovered the path one day last summer I have quietly considered it to be my own personal "road less traveled." But now, after receiving much pressure from the ghosts of Earth Days past, present and future, I will share the news on this freshest of Albany’s alternate routes. 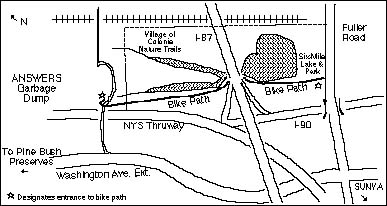 The idea for the path came from Don Rittner as a part of his proposed greenbelt that would surround Albany (The plan for the greenbelt seems to be locked up in some dark dusty cell of City Hall, but should be up for parole at any time now.) The path was built by some workers from DOT and is very handsome for a paved road. For folks who live downtown or at SUNYA and would like to cycle up to the Pine Bush Preserves, the path is a valuable addition, since it bypasses the most dangerous section of Washington Avenue. One entrance to the path is on Fuller Road, just north of Washington Avenue and the Thruway overpass, or is accessible from the Six-Mile Park parking lot. The other access point is on Rapp Road, at the entrance to that huge mountain of garbage known as ANSWERS. This is a possible explanation for why the city has not publicized the other-wise important impressive bicycle route.

For those of you not familiar with the Six-mile Reservoir (a.k.a. Rensselaer Lake) and surrounding park, it is a 350-acre nature preserve within the City of Albany. The lake was formed in 1850 when three Pine Bush streams were dammed to create a freshwater reservoir for the City. Most local citizens and passersby would be surprised at the diversity of species and level of tranquility that exist within the park. In the warm season I often sneak away from the nearby SUNYA campus and pedal over to the lake. As I sit by the water eating a lunch of last night’s leftovers, a family of turtles may be sunning on a half-submerged fallen tree, while a curious dragonfly tastes my salty skin. The best time to greet the lake, however, is dawn. After an early morning bike ride along the lake, experiencing the mist among the trees and on the water, one’s perspective of being "stuck in Albany" can be suddenly transformed. And then the mind begins to wander, what it must have been like around here before all the highways and subdivisions, office parks and parking lots.

Another point along the bicycle path which is worthy of contemplation appears near the Rapp Road entrance. This is the site of where a colonial tavern was built c. 1704 and operated until 1792. It was a stop for thirsty and weary travelers as they went along the Maquas Padt (Mohawk Path, or later, King’s Road) between the settlements at Fort Orange (in Albany) and Schenectady. A plaque marks the site, as a joint effort of the Van Valkenburgh family society and Save the Pine Bush.
An offshoot of the main paved route connects with the unpaved Village of Colonie Nature Trails. These trails go through rare old-growth forest with some very grand trees, and deer frequently wander in from the Pine Bush preserve across Rapp Road.
Please be alert, fellow cyclists: getting to and from the bike path can entail dodging a lot of seemingly sadistic motorists. The phrases, "Get out of the road!" and "HOOONK" come to mind. But hopefully real soon more and more folks will get turned on to the sensibility and enjoyment on bicycle travel. And if there are any other closet visionaries in the crowd, its high time that we put our heads together and draw up plans for a comprehensive network of local bicycle paths. Combined with a more imaginative public transportation system, this will make the Hudson-Mohawk region a much healthier and more interesting place to live.

Several years ago, there was discussion of constructing a hikers underpass beneath the bridge which carries Route 155 over the Thruway, in order for people to walk safely from one part of the City preserve to the other in general. This would, in addition allow one to continuously and safely, hike along the ancient Maquas Padt, or King’s Highway, from the west end of the dump to it’s intersection with Old State Road, or vise versa. This special underpass would be just to the left of the work "York" on the accompanying map. Incidentally, this relatively inexpensive facility would allow one to walk from either part of the City preserve across the west side of the bridge and proceed safely into the State preserve without crossing traffic. Please write to the NYS Thruway Authority and the Pine Bush commission with copies to the Mayor and Governor to urge this hikers underpass.