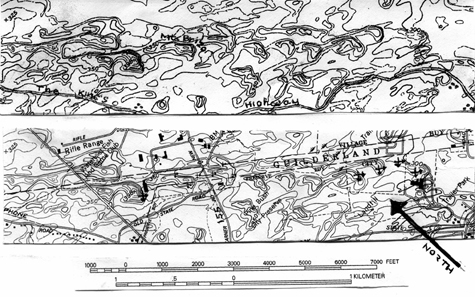 Now: you can see it at a glance. The top topo map displayed here, is of the Karner Dune Field, the Type Locality of the Karner Blue Butterfy, in the Pine Bush, as it was way before Rte. 155 appeared. A unified field, fully connected west to east. This dune field is a grouping of sand dunes within the much larger Schenectady-Albany “Dune Belt.” All. of the cultural information has, here, been removed by Jerry Mueller, from the earliest USGS 7 & 1/2′ maps, through GIS manipulation. I have only added the Colonial King’s Highway. A striking and, locally, unusual sandform jumps right out on this map better than on any other. It forms a connected, chain, consisting of the frontal slip faces, and northern lateral ridges of 10 parabolic sand dunes whi aligned in an echelon formation. These are like the famous Province Lands dunes in echelon, at Cape Cod. The main difference being that we don’t have the ocean here, and they don’t have Karner Blues. Lets be careful lest we become left with only the Karner Blue blues. Look at the top map, and the North Arrow and you can see how U dunes became J dunes through shifting winds. First northwesterly, then southerly. Keep in mind that Karner Blues tend often to be found on the western and southern slopes of the dunes.

All of this bespeaks uniqueness, speaking of which, the whole Karner Dune Field could, again, be the best bet for preserving the Karner Blue in the Pine Bush. This dune field, at one time, had the largest concentration of Karner Blues in New York. Why this former concentration of Karner Blues in the Karner Dune Field? Kurt Johnson and Steve Coates, two lepidopterists, wrote: “ The Karner Blueis adapted to live in barren-savanna ecosystems.(Nabokov’s Blues, 1999, page 241). They go on to describe how the Wild Blue Lupine plant upon which the Karner Blue Butterfly feeds as a caterpillar, is sand and fire adapted and needs lots of wide open, sunlit space. Further: “It depends on intermittent lightning ignited fires that swept the barrens, before the encroachment of humankind, to burn off the herbaceous plants that otherwise crowd it out; it is one of the first plants to spring up after a fire.” Then Johnson and Coates go on to explain why the Karner Blue needs a very large, savanna like area and a metapopulation to survive. The fires would destroy Karner Blues but there would always be some “populations nearby untouched by the flames, and with the understory of the burnt area cleared of undergrowth, allowing lupines to thrive, The metapopulation of Karner Blues would soon restock the burned area in renewed profusion. The Karner is thus a “fugitive” species,driven from place to place.” When a visiting biologist, Fred Slauch, was taken on a tour of the Karner Dune Field , several years ago, he told his Save the Pine Bush guides, that it was; “the best example of a pine barrens savanna that I have ever seen.“

The problem is that the Karner Dune Field has been encroached upon by construction, and split up by paved roads and parking lots over the last 40 years. This began with the dune field having been bi-sected by Rte. 155 in 1966 and , more recently with the northern extension, into the City’s Pine Bush Preserve, of the Albany City Dump. This dump was early on aptly named “Mt. Trashmore” by pubic interest activist Rocco Ferran. By this action of the City, lots of lupines were destroyed. The expansion prior to this last one, had destroyed what then, was the latest and most easterly new Karner Blue colony north of the Thru-way. This in spite of forever wild promises to close the dump down, made by a succession of Mayors and Environmental Conversation Commissioners. The updated map below Jerry’s, has symbols of crossed shovels indicating partial or complete removal of dunes. These together with the buildings and paved roads shown, tell the same story.

The Karner Blue population has plummeted so drastically in the Pine Bush, and elsewhere in the last 20 years that it had to be declared a Federal Endangered Species. (see Robert Dirig’s Karner Blue distribution map in his internet “Karner Blue Sing Your Purple Song,” 1997) In response to this problem, The Pine Bush Commission has been making a commendable and energetic effort to enchance existing Karner Blue habitat and restore additional habitat. Much of this is being done in the Karner Dune Field. This is being done, with cues from the original plan, through a combination of expanded and more frequent controlled burns, and mechanical removal of competing shade out plant species. Both of these are followed up by planting new lupine plants. There are now many acres of new lupine. Within the Karner Dune Field, this has made it possible for the one colony that had survived there to expand eastward across Rte. 155 and re-establish a new colony. All of these are to be seen only, among and along the dunes in echelon. This is extremely encouraging, yet I feel that Karner recovery would be even more surefire with additional measures. Some, perhaps all, eventually, of the damaged dunes in the Karner Dune Field should be restored in their outward shapes. Also the Karner Dune Field could be re-connected by it’s entirety or, at least, by about half. Of course all of this would require the re-construction of Rte.155 as a tunnel between AMTRAK and the Thru-way, Or,at the very least, between AMTRAK and Old State Road. Even the latter plan would enable the full restoration of that unusual dune chain, and allow for a , hopefully, adequate, and secure, Karner Blue migratiion corridor. Not to mention that either plan would vastly enchance the natural beauty of the place. Either plan would require the removal of the Credit Union building, and of a consequence the construction of The Pine Bush Visitor Center elsewhere, perhaps in the nearby hamlet of Karner. This would, immediately improve the scenery and be a boon to the new colony.

We should and can, re-connect the best Karner Blue habitat there is in the Pine Bush. Beyond this we need, collectively, to better reconnect ourselves to the environment. The well- being and survival of humankind depends upon it. The environment is not a separate subject off on the side. It is key and central. The Dutch who named the Pine Bush, and whose connection with, the Albany Area boasts of, very poignantly, call the environment; our “milieu“.