Lynne Jackson remembers when Save the Pine Bush was 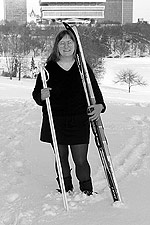 founded. It was February 1978, and the Albany City Planning Board had gone forward with a public hearing on four development proposals in the Pine Bush, despite a snowstorm so bad the state workers had been sent home early. Then the city planner closed the hearing because of the weather before all the opponents who had showed up anyway got to speak. Enraged, a group got together and eventually decided to sue. It wouldn’t be the last time.

“In the beginning it wasn’t very easy,” Jackson recalls. “You’re not a popular person if you’re suing the city of Albany, and we sued them a lot. It’s hard for me now to remember how afraid I was.”

Though she wasn’t at the forefront in the early years, SPB work took up a lot of Jackson’s time. “At times I think I was a terrible employee,” she jokes (she is now self-employed), because of the time she would take off to go to hearings and meetings. Once, when SPB was being sued itself, she arranged to work 1 to 9 PM on Thursdays in order to have one morning a week to devote to the cause.

As with many dedicated activists who are part of sustained group efforts, Jackson is uncomfortable with the spotlight on herself. Save the Pine Bush “was made up of regular people who care deeply about this ecosystem,” she says, noting that many others, including Rezsin Adams and John Wolcott, had been involved from the beginning as she was. But at the moment Jackson is one of the most consistent public voices for the group. “I’m just the one out there making all the noise,” she says.

Many of the victories of SPB are well known—the creation of the Pine Bush Preserve Commission, and the purchase and preservation of large areas of the unique ecosystem. But the fight isn’t over. Recently Jackson has found herself at a flurry of public hearings and comment periods on development and rezoning proposals for the Pine Bush.

They are small—4 and .69 acres. But that just means the Pine Bush is being eaten away by degrees, Jackson frets, sounding frustrated as she recalls trying to explain to the Albany Common Council how these little projects still fragment the habitat of the endangered Karner blue butterfly, which needs to follow patches of lupine that grow in different spots each year. “In some ways it’s even more difficult because we’re fighting for very small pieces of land. No one comes in with a 200-acre proposal any more.”

Jackson, as with many devoted Save the Pine Bush members, has also learned to look at the bigger picture, which she describes as: “making urban places really nice places to live, so people will leave our wild places alone.” She’s therefore proud of her long-term residence in Albany’s South End. “A lot of people are very surprised that I live in South End. They think I would live near the Pine Bush,” she says wryly.

And despite the difficulties, she knows that Save the Pine Bush has had one overriding success over the years: “Everybody knows about the Pine Bush.”

Printed in the January/February 06 newsletter