2016 was a fairly busy year for the environment and for PAUSE. We began by joining with the Break Free Coalition in January to plan the nationally covered Break Free From Fossil Fuels march and rally here in Albany in May. More than 2500 people gathered in Lincoln Park from as far away as Wyoming to urge our elected representatives to stop investing in fossil fuels and to highlight the social injustice low income communities are forced to endure because of our addiction to dirty energy.

In recognition of Earth Day, PAUSE co-sponsored the Earth Day Fair and Bike Parade at Washington Park in April. Hundreds of visitors learned about conservation, recycling and alternative energy from a multitude of socially responsible vendors such as solar installers, electric car dealers, and presenters from PAUSE, Solarize Albany and the Mayor’s Sustainability Committee, to name just a few.

In July we marked the 4th anniversary of the devastating train derailment in Lac Megantic Quebec, by hosting a solemn vigil at Island Creek Park, followed by a picnic. Simultaneously, a flotilla of 40+ boaters paddled down the Hudson to draw attention to the northern most point at which the Pilgrim Pipelines would cross the river the first of two times, should it be built.

Though both the NED and the Constitution pipelines were canned due to a lot of hard work and tireless campaigning against them by many environmental groups, we are still facing the devastating completion of the AIM pipeline next to the Indian Point Nuclear facility. Many brave activists have literally put their bodies on the line to stop the project and have been arrested in the process. We continue to support them in their efforts.

The Pilgrim Pipelines, a pair of petroleum pipelines between Albany and Rensselaer on the north end and Linden, NJ on the south end are also in the planning stages. The southbound pipeline would carry crude oil brought in by train to Albany. Based on the initial proposal, the pipeline would approximately double the oil train traffic compared to what was coming into Albany at its peak a couple years ago. The pipeline is facing extensive opposition from governments and organizations in the Hudson Valley and northern New Jersey.

The NYS DEC and the Thruway Authority are co-lead agencies for managing the State Environmental Quality Review Act process for the pipelines. In September 2016, they issued a positive declaration, stating that the project would need an environmental impact statement (EIS). The first step of the EIS process will be “scoping,” which is essentially developing an outline of what impacts the EIS needs to consider. The public will have an opportunity to comment on the draft scope, once it’s available. This comment process is important because it largely determines what will and will not be included in the EIS. Please keep an eye out for news about the Pilgrim Pipeline scoping process, from Riverkeeper, PAUSE or other organizations. The scoping process is important as local considerations that might not be considered or known about such as historical sites, other infrastructure already in place, impacts from prior projects and other potential impacts WILL be included in the scoping process. The more we get in there, the longer it will take and the harder it will be to complete.

Finally, PAUSE has been accepted as a local affiliation of national 350.org. PAUSE will remain true to our mission of stopping the “bomb trains” which now includes the thousands of ethanol cars coming into the port; as well as advocating for the health and safety of our neighbors in the South End; supporting grassroots organizations who are fighting for the passage of environmental legislation, fighting projects which invest in new fossil fuel infrastructure, such as the nuclear “bailout”; while also working with 350.org on both their local and national events and actions.

PAUSE meets the first Thursday of each month at Citizen Action, 94 Central Ave from 5:30 – 7. All are welcome and encouraged to attend. We also meet on the 3rd Wednesday with Save the Pine Bush for their dinner- lecture series each month. Year end donations are greatly appreciated. Mail to PAUSE, c/o Diana Wright, 36 Summit Ave, Albany, NY 12209.

We look forward to the interesting and challenging year ahead and to working with all of you to forge a safe, healthy and peaceful world. 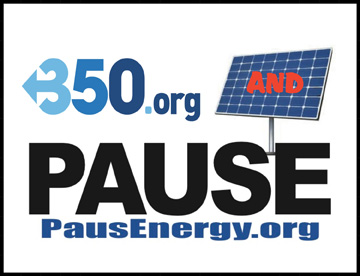