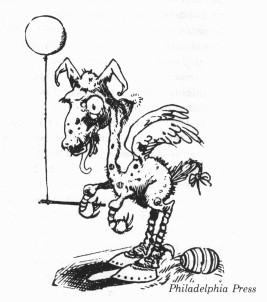 The Albany Pine Bush Devil is a rare subspecies of the equally rare Jersey Devil found in the Pine Barrens of New Jersey. The Jersey Devil, widely seen by thousands of people around the turn of the century, has reportedly not been observed since the early 1950’s, although reports of its tracks have been found up to the 1970’s. The body is about the size and shape of a large German shepherd, the head variously described as dog-like or horse-like, a long tail, hoofed hindlegs on which it often stands, and large bat wings which are quite functional.

According to unreliable sources, Mr. Touhey was walking around the property with a fly swatter looking for Karner Blue Butterflies and Buckmoths, when a loud hissing sound filled the air. Suddenly and with great speed a Pine Bush Devil shot out of a clump of scrub oak and landed on Mr. Touhey’s shoulders, tearing his head off faster than he could cry out. Then, without seasoning or marinade, the creature devoured every bit of Mr. Touhey except for his bad intentions regarding the Pine Bush, which were so foul even the devil couldn’t swallow them.

Residents of The Dunes development, who could not possibly be identified, reported loud groaning and belching noises emanating from the Pine Bush for the next three nights. Reports that Mr. Touhey is alive and well and not eaten by an endangered animal are clearly part of a massive coverup, and the Charlie Touhey seen daily by scores of witnesses is certainly either a hologram or animated mannikin. Without doubt this conspiracy to conceal his devourment is somehow connected to Mr. Touhey’s recent political arrest by State Police for the high crime of daring to hold up a banner while current Governor Pataki was politicking. [True Fact! -ed.] Despite repeated phone calls, the Albany Pine Bush Devil has refused to comment.

In 1909, thousands of people across western New Jersey and eastern Pennsylvania reported seeing the Jersey Devil, causing mass panic. The newspapers reported the phenominon in a predictably sensational manner, but often didn’t treat it seriously, as these drawings from Philadelphia papers show. 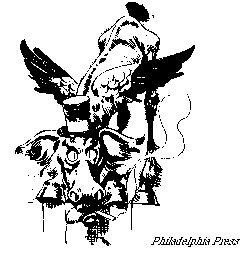 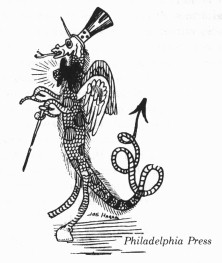 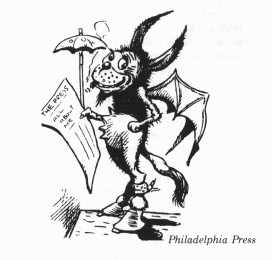